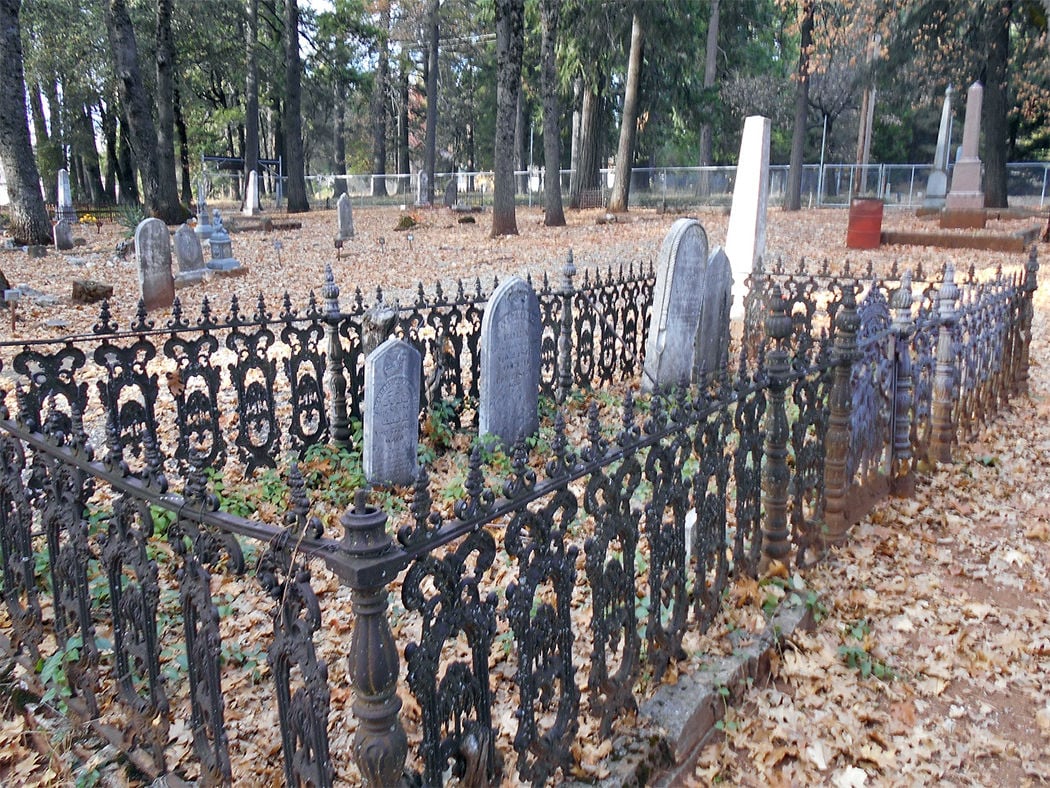 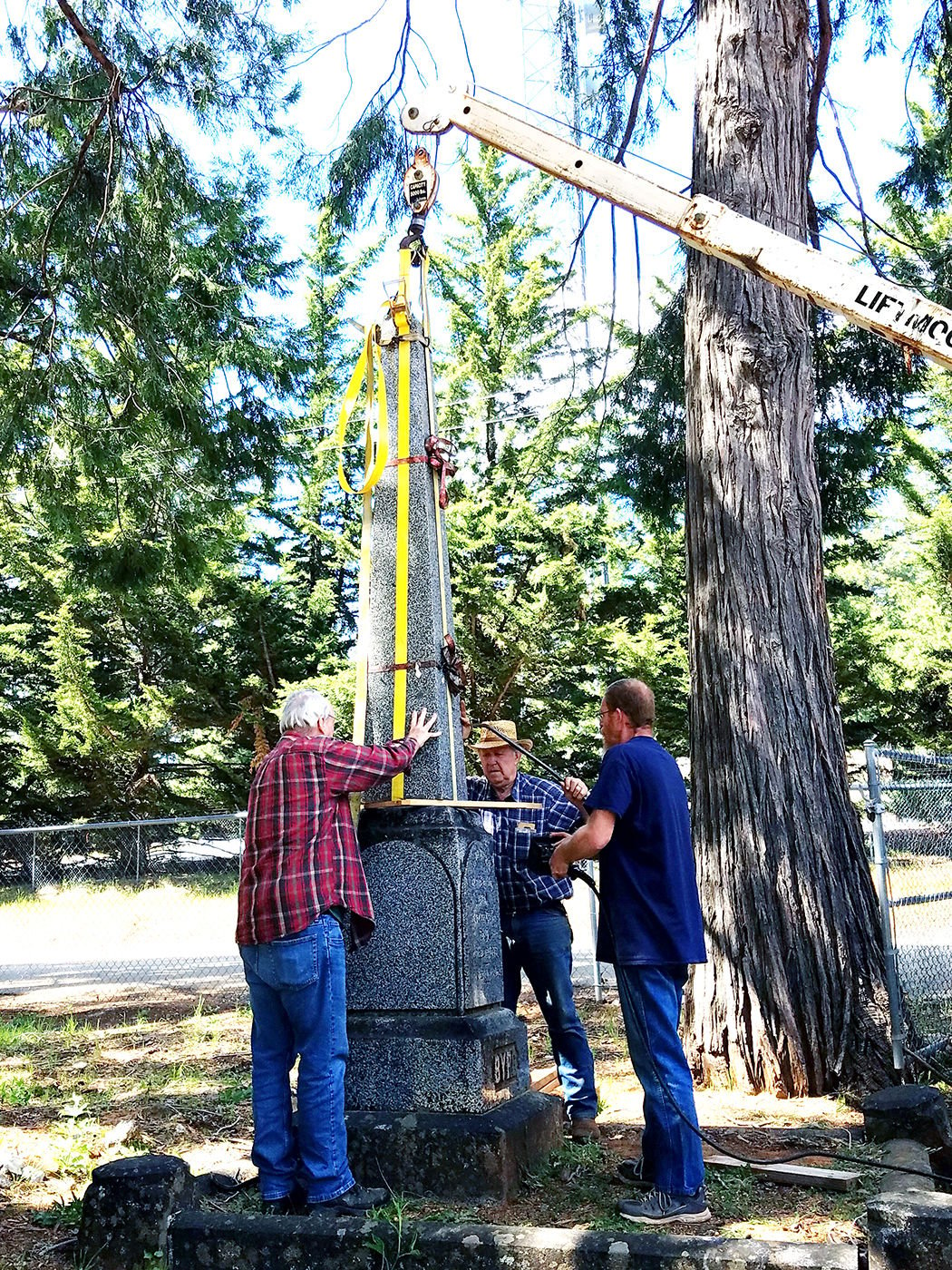 Pre-work for the cemetery clean-up. Larry and Andy Jordan repair the obelisk of the Byrd monument. Steve Smith mostly watched and provided his “professional” opinion. A large tree came down in a winter storm and toppled the 1,500 pound top of the monument. Photo by Carol Mobley-Jordan.

With Memorial Day approaching our Annual Clean up day is scheduled for Saturday, May 23rd from 9 a.m. to 12 p.m.

Anyone is welcome to come,  bring your rake, gloves and be part of something that we do every spring to maintain the cemetery on Church Street. This cemetery is so beautiful, peaceful and full of history. It wouldn't be this way without volunteers like you.

We also have rakes and tarps to haul. We will bring a case of water. It's a great way to work together outside and be part of something special. The Foresthill Community Cemetery  Board appreciates your help!

The following article appeared in the October 23rd, 2013 Messenger:

The old Foresthill Protestant Cemetery, now called the Foresthill Community Cemetery, dates back to the Gold Rush Days. The oldest known grave is that of George W. Henry, who passed away in 1858. The cemetery is located at the east end of Church Street (formerly known as School Street) on approximately two acres of land that was part of a mining claim. In 1953, Norman Brown had the claim patented and purchased 80-plus acres from the Bureau of Land Management. Rod and Cindy Delmue became the owners of the property in 1986.

Early in the cemetery’s history, a Methodist Church and parsonage were located approximately one block away. Both these buildings burned in about 1917.

Among the many pioneers buried in the cemetery are:

J. W. Byrd, a native of Virginia who settled in Bird’s Valley near Michigan Bluff before 1850. He owned the historic Byrd’s Trading Post in that area.

William Rea, a native of New Brunswick, Canada, who was owner of the Rea Hotel and part-owner of the stagecoach line from Auburn to Michigan Bluff.

John D. Rains, a native of Clark County, Illinois, who, in 1852, drove a team of oxen across the plains, arriving in California in the full of that year. He mined in Placerville, then in Shirttail Canyon, and then came to Foresthill in 1861. He owned a butcher shop in the old town of Foresthill and later opened one at the town’s present location. He then lived in Damascus for 22 years, and then in Bath for the last three years of his life.

Leonard Remler, a native of Germany, who opened his first store in Todd Valley, then in 1864 founded the Remler Brothers Grocery and Dry Goods Store in Foresthill.

John H. Brown, a native of Denmark, who was captain of a Danish sailing ship. He was hauling potatoes from the Sandwich Islands to San Francisco when gold was discovered in California. He left his ship in the Bay when his crew jumped ship and came to Foresthill around 1850. He became Mining Superintendent of the New Jersey Mine.

The Gold Rush boom ended and the population on the Divide slowly declined as even the best mines played out. By the 1980s, the once thriving town of Foresthill was simply an unincorporated area of Placer County. Much of the town had fallen into disrepair, including the cemeteries. The cemeteries that existed at that time were the Foresthill Protestant Cemetery, the Catholic Cemetery, the Todds Valley Cemetery, the Spring Garden Indian Cemetery, smaller outlying cemeteries in Yankee Jims and Michigan Bluff, and a few other small, historic burial locations which were no longer in use.

The possible formation of a Foresthill Cemetery District was brought before the public first through the Foresthill Forum, a municipal advisory council to the Placer County Board of Supervisors. The issue went on the ballot on June 7, 1988, specifying that the Foresthill Protestant Cemetery, the Yankee Jim’s Cemetery and the Odd Fellows Cemetery at Michigan Bluff be incorporated into the proposed district. The Catholic Cemetery, Spring Garden Indian Cemetery and Michigan Bluff Masonic Cemetery were to remain private, and historic cemeteries no longer in use were to remain as they were. The annual assessment on the property owners of the Divide was to be $10.00 for each developed parcel and $3.00 for each undeveloped.

The proposed cemetery district needed a two-thirds vote to pass. It failed with only a 59.6% “yes” vote, partly because of multi-parcel owners who objected to the fees.

On February 16, 1989, a group of Foresthill citizens, disappointed in the outcome of the election and increasingly concerned at the state of neglect that existed in most of the cemeteries on the Divide, organized the Foresthill Volunteer Cemetery Committee to assume responsibility for ongoing cemetery maintenance.

The original committee members’ were Eugene Thomason, Chairman; Bertram Esposto, Vice-Chairman; George Grant; Madeline Howard; Wilma Gonzales; Ermine Duccini and Peggy Wilson. Their initial job was to seek “donations to buy tools, materials and equipment to clear, repair and maintain the Foresthill cemeteries.” Distant relatives and friends of those interred in the Divide cemeteries were asked to “support this significant historical community project financially and statistically, too, by supplying the Foresthill Cemetery Committee with pertinent data on their departed loved ones.” Volunteers were called from the community to become involved in the massive attempts at cleaning up the Divide cemeteries. Family members, friends and other concerned citizens were encouraged to help in work parties and/or send their donations. The Foresthill Cemetery Committee held quarterly business meetings at Grant Plumbing and Hardware on Gold Street in Foresthill and work parties throughout the seasons when work could be done.

The committee set up these suggestions for families wishing to use the Protestant Cemetery for a burial:

4. No fences of any kind to be erected around graves; flat concrete borders to be the exception.

5. Plots to be kept in uniform rows with designated walkways.

6. No glass flower containers allowed (metal or plastic only).

7. Donations of $100.00 per burial. Check made out to the Foresthill Cemetery Committee for future grave maiintenance.

Public support for the Foresthill Community Cemetery was shown from a new source: Boy Scout Kyle Hester of Troop 26, going for his Eagle rank, selected as his community project the construction of a public drinking fountain in the cemetery. The new fountain was dedicated on May 14, 1994.

Through the work of the committee, the issue of a cemetery district again went to the voters on the ballot of June 7, 1994. For months prior to the election, committee members embarked on an all-out educational campaign, making personal appearances at various community group meetings and being highly visual in the local newspaper, the Foresthill Messenger, hoping to swing the vote to the 66.6% needed to pass.

The members of the Foresthill Volunteer Cemetery Committee, again disappointed, began working toward incorporation as a non-profit entity dedicated to the continuous maintenance of the existing cemeteries and eventual acquisition of more land for cemetery use.

The Foresthill Volunteer Cemetery Committee became the Foresthill Cemetery, with fully legal non-profit corporation status, in 1996. The most active committee board members working toward this status were Gene Thomason, Frank Nafziger, Shirley Hawkins, Gerda Percival, and Kim Poiez. Bert Esposto, also on the board, was no longer very active, due to failing health, and had to move to Auburn to be closer to medical facilities.

At this date the Foresthill Cemetery is still in need of additiona1 land, more concerned volunteer workers, and funds.

Compiled by Mona Wright in 1998 from prior publications by the Foresthill Volunteer Cemetery Committee, interviews with Gene Thomason and Frank Nafziger and news stories from the Foresthill Messenger’s files.

Do You Think It Is the Proper Time to Reopen all Businesses?