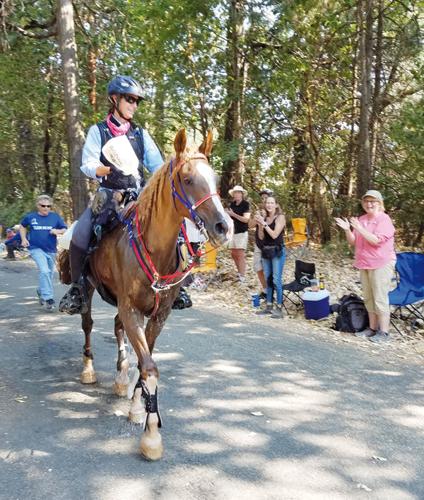 Lindsay Fisher and Monk, an Arabian Chestnut Gelding, were the first to arrive in Foresthill 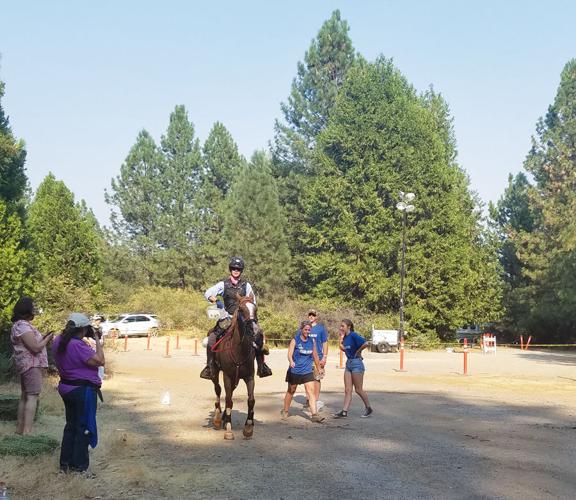 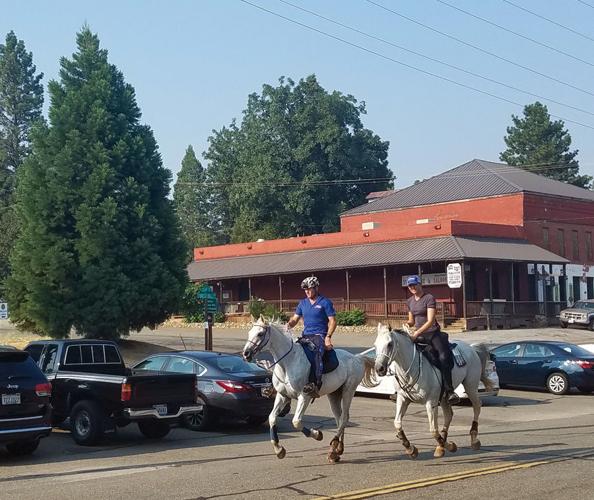 After leaving the Foresthill Aide Station riders proceed down Main Street and back into the canyon at the end of Lowe Street.

The 63rd Annual Western States Trail Ride, popularly called the Tevis Cup Ride took place on July 28, with Heather Reynolds and her ten year old Chestnut Arabian, Cayucos, as the first place finisher. Heather accomplished the endeavor from Robie Park, Truckee to the Auburn Staging Area in the time of sixteen hours, forty-five minutes. Sixty-four riders out of the one-hundred forty nine starters were able to finish within the 24 hour time limit with their mount judged “fit to continue” and received the coveted silver Completion Award Buckle.

The Tevis Ride was first organized by Wendell Robie, an Auburn businessman and devoted horse rider of the Sierra high country. Wendell wished to prove the modern-day horse could still cover the rugged trail from Lake Tahoe to Auburn in a single day. In August of 1955 Wendell and a few of his friends proved that it still could be done. He continued to hold the strenuous ride annually and organized the Western States Trail Foundation to preserve the 100 mile trail and event. Today, the primary mission of the Western States Trail Foundation is to preserve the historic route taken by Paiute and Washoe Indians, Gold Rush explorers, Comstock hopefuls, and Express Riders of the Wells Fargo and Adams Express Companies. Today this route provides rewards of exploration, challenge, accomplishment, wilderness, nature and a bolstering of spirit for horsemen, hikers and runners alike.

The Tevis Cup trophy is awarded to the rider who completes the 100 Mile-One Day trail in the shortest amount of time and whose horse is in sound condition and “fit to continue”. The Tevis Cup was named for Lloyd Tevis (1824-1899) and was first awarded to Nick Mansfield, riding Buffalo Bill, an eleven year old TB Cross gelding in 1959.

Another major trophy, the Haggin Cup, went to MM Cody, a Mustang, ridden by Mykaola Corgnell. This award is given to the horse that is in the “most superior physical condition” of the first ten horses to cross the finish line. The Haggin Cup, named for James Ben Ali Haggin (1821-1914, was first awarded in 1964 to Paige Harper, riding his six year old Arabian gelding, Keno.

The James Ben Ali Cup is awarded to the horse among the first ten to finish judged to be in the most superior physical condition by the Veterinary Committee. The Josephine Stedem Scripps Foundation Cup, established in 1994 to recognize each of the finishing Junior Riders for their special achievement. The first Junior finisher was David Jay, Jr., who completed the 3rd annual ride in 1957.

The Robie Trophy, in honor of the founder of The Western States Trail Foundation, will be awarded to all horses that have successfully completed at least five Tevis Cup rides. The Board of Governors felt, given the difficulty of finishing a single ride, it would be appropriate to recognize the endurance and longevity of horses that have completed five or more rides.

Foresthill residents and teams supporting all of the riders lined Bath Road and cheered on the first rider to make it into the check point, Lindsay Fisher from Napa Valley, CA, and her sixteen year old Chestnut Arabian, Monk. Lindsay and her steed looked to be in great shape with a big smile on her face as she rode in.