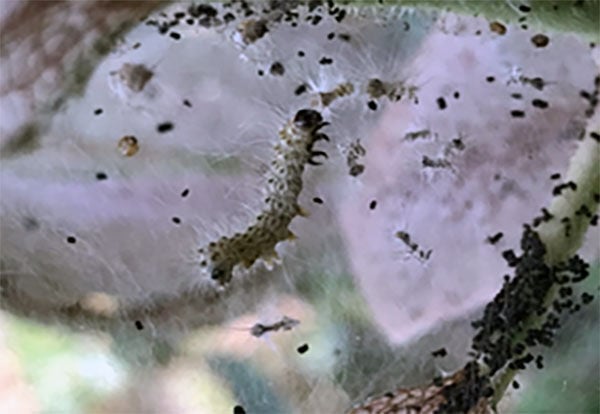 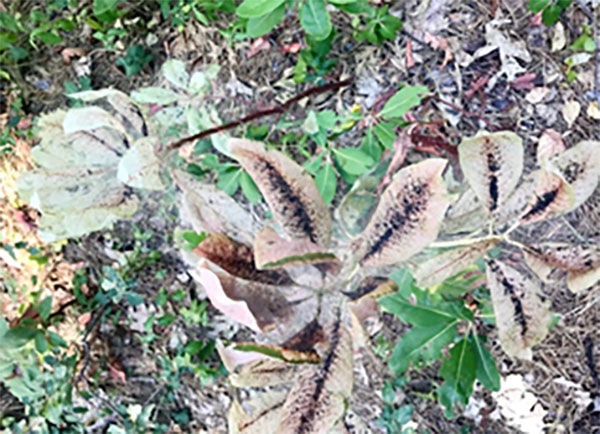 During this time every year, you start to see Pacific Madrone, Arbutus menziesii, sport brown silken web tents at the end of their branches and by the end of September these tents have extended up the branches and sometimes onto other branches.  Maybe you have even seen them in your apple trees.  Although they look like fine detailed spider webs, they are actually the creation of Fall webworms or Hyphantria cunea.

Fall webworms infect more than 100 deciduous species of broadleaf ornaments, fruit and nut trees.  From July through September, they appear in their larvae stage as a hairy yellowish-brown caterpillar with long white hairs coming from black and orange spots.  They spend the winter as pupae either on the tree or on the ground and emerge as moths in the late spring to lay eggs that hatch into caterpillars in late summer.  There is one generation every year.   When profuse, larvae can consume all the leaves on a tree but generally a strong and healthy tree can withstand moderate defoliation.   During a normal season, webworms are not abundant and even sometimes harmless in part because they have many predators including parasites and birds.

Usually human intervention is not necessary if the outbreak is not seriously compromising your tree.  However, if it is a fruit or nut tree, steps should be taken to remove the pests and avoid reduction in production. If caught early, removing the infected branch(es) by pruning, placing it in a sealed plastic bag and disposing of it in the garbage is the least expensive and effective means.  If the branch is high, consider purchasing a long arm pole saw/pruner to reach the infected area from the ground.  Remember to remove all portions of the infected branch up to and including any evidence of webbing or the webworms will continue their onslaught.

Only if webworms are high in number should you resort to the next step in fighting this pest, applying a spray of Bacillus thuringiensis (Bt) which is an organically acceptable method.  Bt is only effective on the larvae (caterpillar) stage.  Make sure the spray penetrates the silken tents for effective control.  A second spray is recommended 7 to 10 days after first application.

The best defense for the homeowner is to act immediately upon any evidence of webworms on your fruit or nut trees and cut out damaged section while early.